All Aboard Northwest Overview 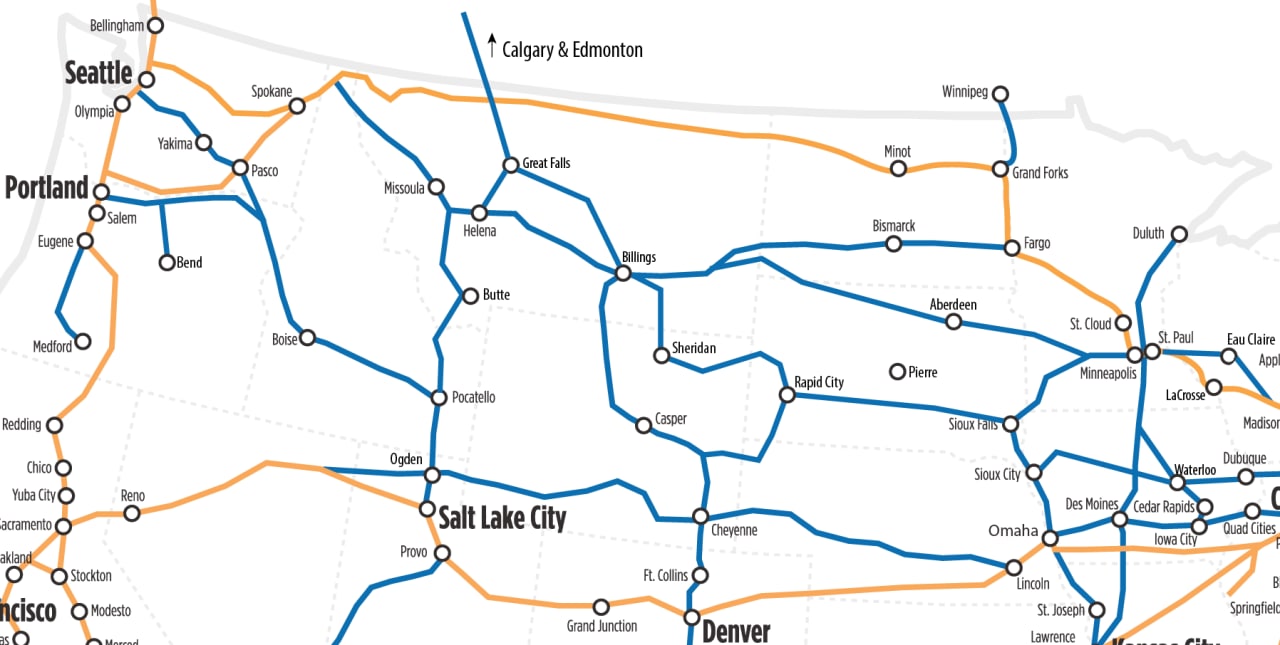 Much of rural America is underserved by long-distance intercity passenger rail options. The March 31 announcement by Amtrak and the accompanying ConnectUs plan service map fails to recognize that shortcoming and bring passenger rail service to long overlooked communities in much of rural America, including the Greater Northwest, defined as Washington, Oregon, Idaho, Utah, Colorado, Wyoming, Montana, North Dakota, South Dakota, and portions of Minnesota and Wisconsin serviced by the Empire Builder.

In 2008, Congress directed Amtrak to review several routes across the Greater Northwest as part of the Railroad Safety Enhancement Act of 2008 (P.L. 110-432). This included a review of the possible restoration of the Pioneer Line—the only intercity rail servicing Eastern Oregon, Southern Idaho and Northern Utah, and of the North Coast Hiawatha Line that had served much of the populated portion of Montana, and provided the only intercity rail service in southern North Dakota. In its study, Amtrak concluded, “[r]estoration of the Pioneer would enhance Amtrak's route network and produce public benefits.” At the time, now-Senate Finance Chairman Ron Wyden (D-OR) noted that it was critical to bring “back a passenger rail line that should never have been closed in the first place.” The study also proposed restoring the North Coast Hiawatha to its 1979 route. Despite that, the Pioneer and Hiawatha Lines were not restored.

When President Biden announced the American Jobs Plan would direct $80 billion to passenger rail, Greater Northwest area residents regained hope that they might once again have access to the same intercity rail service that connects metropolitan areas in other parts of the country. Unfortunately, this hope was dashed on March 31 when Amtrak released its proposed service changes, once again neglecting areas like the Greater Northwest, and instead directing the majority of funding to the Northeast Corridor.

The participants in the Greater Northwest Working Group urge correction of this oversight so that we can reconnect our communities to the rest of Amtrak’s network and the country. With President Biden’s emphasis on “sparking the second great railroad revolution,” we believe it would be a drastic mistake if the people of the Greater Northwest were left behind.

We propose several congressional actions to begin the process of restoring passenger rail service to the Greater Northwest and other parts of rural America.

Passenger rail can generate a myriad of economic, social, public health and other benefits that other modes of transportation cannot hope to produce. It is time that these benefits—now enjoyed by urban citizens—be extended in full measure to rural America.